In this article, I decided to go the technical route and sharing my experience with writing a custom hook and integrating some functional programming strategy. The article walks through a custom hook - useRecorder().

this article was translated to Chinese (@infoQ China) 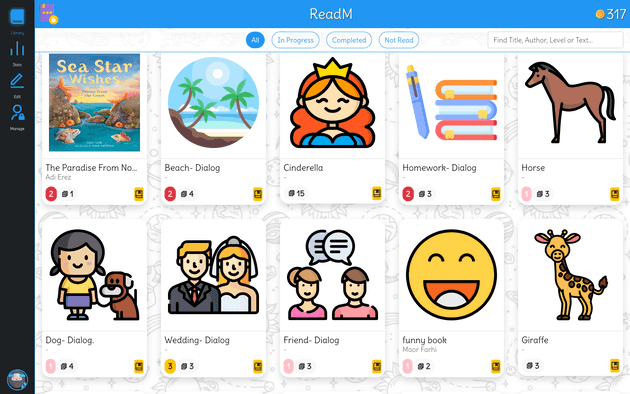 This hook’s purpose is to provide a recorder’s functionality:

I designed the useRecorder() hook to be used with the paragraph component - this component is composed of 3 components - A Speaker, A Speech Tester and A Recorder Button. The Recorder button is actually a simple rounded button which appears once the user has said the sentence and the feedback has been given. Only then, the user may click the recorder button to listen to the last attempt.

The description above is implemented in this code snippet (I removed some the actual code to make it shorter for this article):

ReadM recorder is shown to the right of the first sentence “the power of your subconscious mind” as a black oval with a white “play” icon. 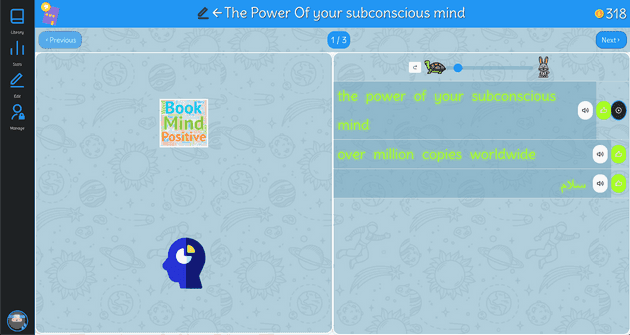 For The useRecorder() actual audio recording feature, i’ve found a nice package that abstracts and simplifies the recording: mic-recorder-to-mp3.

Thanks to using this module, the hook’s code is quite short. However, it simplifies the building blocks it is made of.

I created two separate states that holds the audio and the player.

In order to cache the recorder for each instance, i’m using a ref:

The start() function updates the recorderInstance with a new recording instance. This instance is a function that is used to stop() the recording. I decided to use th strategy of useEffect() and Observables the use the return value of a constructor as a destroy/cancel functionality (notice that i’m checking whether recording is supported - i’ll refer to that later in this article):

The record() function is a functional composition of three functions - which is introduced in the section.

Next, the async stop() function returns a reference to a blob audio file and a instance of the audio player that can be used to play the audio at any given time. These are, respectively, saved within the state introduced a the beginning of this hook.

A word about recording speech: to this date, recording speech is not available in android via Web API. I’m using the navigator’s userAgent object to determine whether this code runs in a mobile or android platform. In order to make this hook error free, both start() and stop() performs a check before running.

With ReadM development, I went deeper into experimenting with functional programming in javascript.

Since ReadM already utilizes Redux, to compose the record() function, I imported compose() from redux:

The result of each function is passed on to the next function. It’s up to the function’s end goal to decide what the return value would be - that to allow some kind of “chainability” so it can be used with a compose() sequence.

With record(), setupMic() runs first an then one by one are invoked while receiving the return value of the latter.

setupMic() creates a new instance of a recorder and returns it:

Next, startRecording(recorder) is invoked with the recorder instance as an argument. It returns the recorder as well. Although this this function just invokes start(), in a broader context, it allow to perform any other logics related to starting the audio or perhaps some other operations:

Finally, attachStopRecording(recorder) is invoked with the same recorder instance as an argument. This function return a new function - a stop() functionality for the recorder which returns both the file (blob buffer) and an audio player instance with this file loaded.

If you prefer arrow functions, the same code would become:

The Benefits of Functional Programming

During development, I was asking - what benefits does it get me?

For starters, I started composing and creating functionality by plugging few functions together, making sure they are linked in some way that keeps the “chain” going. These functions are reusable for other purposes - other operations or functionality that I may use in other situations.

Testing becomes much more modular, precise and isolated to self operable units. The responsibility for each unit becomes much smaller, dedicated to a simple task.

Overall, I like the final outcome. The code is small, simple and easy to maintain. Coming back to this code few months after I wrote, I can read and understand it quite fast.

I always keep on eye on how to improve existing code. There are optional configurations that can be added to the hook’s function signature, ie: resulted file name, recording bit-rate, different file type, init with an existing file blob.

We can go further to be more reactive with the implementation, and have the start() and stop() functions run as effects (with useEffect()) with creating a single “activate()” function that will trigger both operations.

My consulting offerings include: Front End Development, Code reviews (React, Redux, Typescript, Javascript, Angular, NgRx), workshops, Consulting and Development. Feel free to reach out thru the below forms or through thecontact page.